- From Randomized Algorithms to 'PRIMES Is in P' 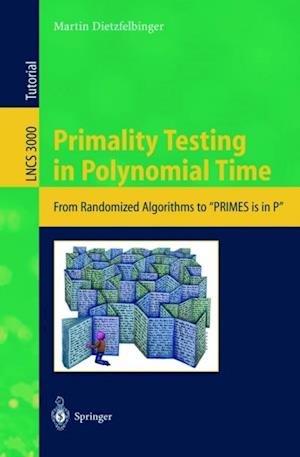 On August 6, 2002,a paper with the title 'PRIMES is in P', by M. Agrawal, N. Kayal, and N. Saxena, appeared on the website of the Indian Institute of Technology at Kanpur, India. In this paper it was shown that the 'primality problem'hasa'deterministic algorithm' that runs in 'polynomial time'. Finding out whether a given number n is a prime or not is a problem that was formulated in ancient times, and has caught the interest of mathema- ciansagainandagainfor centuries. Onlyinthe 20thcentury,with theadvent of cryptographic systems that actually used large prime numbers, did it turn out to be of practical importance to be able to distinguish prime numbers and composite numbers of signi?cant size. Readily, algorithms were provided that solved the problem very e?ciently and satisfactorily for all practical purposes, and provably enjoyed a time bound polynomial in the number of digits needed to write down the input number n. The only drawback of these algorithms is that they use 'randomization' - that means the computer that carries out the algorithm performs random experiments, and there is a slight chance that the outcome might be wrong, or that the running time might not be polynomial. To ?nd an algorithmthat gets by without rand- ness, solves the problem error-free, and has polynomial running time had been an eminent open problem in complexity theory for decades when the paper by Agrawal, Kayal, and Saxena hit the web.