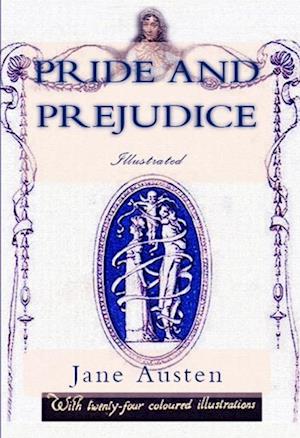 Pride and Prejudice is a novel by Jane Austen, first published in 1813. The story follows the main character Elizabeth Bennet as she deals with issues of manners, upbringing, morality, education, and marriage in the society of the landed gentry of early 19th-century England. Elizabeth is the second of five daughters of a country gentleman living near the fictional town of Meryton in Hertfordshire, near London.The novel centers on Elizabeth Bennet, the second of the five daughters of a country gentleman. Mr Bennet is a bookish man, and somewhat neglectful of his responsibilities. Mrs Bennet is a woman lacking in social graces and primarily concerned with finding suitable husbands for her five daughters. Jane Bennet, the eldest daughter, is distinguished by the kindness of her attitudes and her beauty; Elizabeth Bennet, the second daughter, shares her father's keen wit and occasionally sarcastic outlook; Mary is not pretty, but is studious, devout and musical albeit lacking in taste; Kitty, the fourth sister follows where her younger sister leads, while Lydia is flirtatious and unrestrained.The narrative opens with news in the Bennet family that Mr Bingley, a wealthy, charismatic and social young bachelor, is moving into Netherfield Park in the neighbourhood. Mr Bingley is soon well received, while his friend Mr Darcy makes a less favourable impression by appearing proud and condescending at a ball that they attend (he detests dancing and is not much for light conversation). Mr Bingley singles out Jane for particular attention, and it soon becomes apparent that they have formed an attachment to each other, though Jane does not alter her conduct for him, confessing her great happiness only to Lizzie. By contrast, Darcy slights Elizabeth, who overhears and jokes about it despite feeling a budding resentment.On paying a visit to Mr Bingley's sister, Caroline, Jane is caught in a heavy downpour, catches cold, and is forced to stay at Netherfield for several days. Elizabeth arrives to nurse her sister and is thrown into frequent company with Mr Darcy, who begins to act less coldly towards her. ABOUT AUTHOR:Jane Austen (16 December 1775 - 18 July 1817) was an English novelist whose works of romantic fiction, set among the landed gentry, earned her a place as one of the most widely read writers in English literature. Her realism, biting irony and social commentary have gained her historical importance among scholars and critics.Austen lived her entire life as part of a close-knit family located on the lower fringes of the English landed gentry. She was educated primarily by her father and older brothers as well as through her own reading. The steadfast support of her family was critical to her development as a professional writer. Her artistic apprenticeship lasted from her teenage years into her thirties.During this period, she experimented with various literary forms, including the epistolary novel which she then abandoned, and wrote and extensively revised three major novels and began a fourth. From 1811 until 1816, with the release of Sense and Sensibility (1811), Pride and Prejudice (1813), Mansfield Park (1814) and Emma (1816), she achieved success as a published writer. She wrote two additional novels, Northanger Abbey and Persuasion, both published posthumously in 1818, and began a third, which was eventually titled Sanditon, but died before completing it.Austen's works critique the novels of sensibility of the second half of the 18th century and are part of the transition to 19th-century realism. Her plots, though fundamentally comic, highlight the dependence of women on marriage to secure social standing and economic security. Her work brought her little personal fame and only a few positive reviews during her lifetime, but the publication in 1869 of her nephew's A Memoir of Jane Austen introduced her to a wider public, and by the 1940s she had become widely accepted in academia as a great English writer.The second half of the 20th century saw a proliferation of Austen scholarship and the emergence of a Janeite fan culture.