Prevail until the Bitter End

- Germans in the Waning Years of World War II 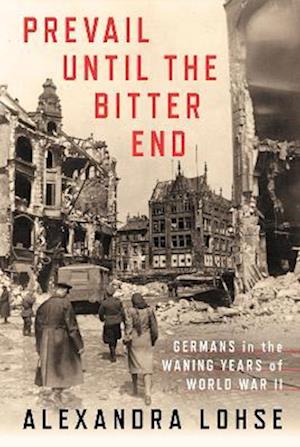 In Prevail until the Bitter End, Alexandra Lohse explores the gossip and innuendo, the dissonant reactions and perceptions of Germans to the violent dissolution of the Third Reich. Mobilized for total war, soldiers and citizens alike experienced an unprecedented convergence of military, economic, social, and political crises. But even in retreat, the militarized national community unleashed ferocious energies, staving off defeat for over two years and continuing a systematic murder campaign against European Jews and others. Was its faith in the Fuhrer never shaken by the prospect of ultimate defeat?Lohse uncovers how Germans experienced life and death, investigates how mounting emergency conditions affected their understanding of the nature and purpose of the conflagration, and shows how these factors influenced the people's relationship with the Nazi regime. She draws on Nazi morale and censorship reports, features citizens' private letters and diaries, and incorporates a large body of Allied intelligence, including several thousand transcripts of surreptitiously recorded conversations among German prisoners of war in Western Allied captivity. Lohse's historical reconstruction helps us understand how ordinary Germans interpreted their experiences as both the victims and perpetrators of extreme violence. We are immersively drawn into their desolate landscape: walking through bombed-out streets, scrounging for food, burning furniture, listening furtively to Allied broadcasts, unsure where the truth lies. Prevail until the Bitter End is about the stories that Germans told themselves to make sense of this world in crisis.