Preservation Versus the People? 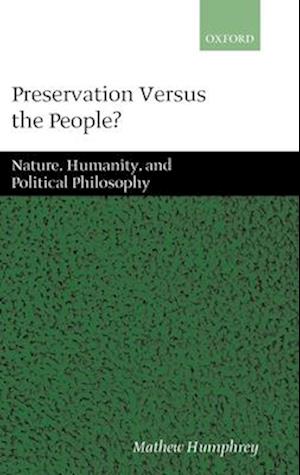 Why should any society take the decision to devote scarce resources, as a matter of public policy, to preserving natural objects? This is one of the questions considered in the field of environmental ethics, and the thinking that has taken place in this discipline has been dominated by the 'ecocentric-anthropocentric' distinction. Answers focus on either 'intrinsic values in nature', or on the human welfare benefits that will accrue from preservationist policies.These two answers are generally taken to be both mutually exclusive and collectively exhaustive. Ecocentric writers believe that their preferred environmental ethic transcends anthropocentrism, whilst those who cleave to a more 'ecological humanist' position, view the turn to ecocentrism as at best anunnecessary diversion or at worst as a thinly disguised expression of misanthropy.This book looks afresh at the question of justifying nature preservation as public policy and challenges the dominant ecocentric-anthropocentric dichotomy. It undertakes a detailed analysis of the ontology and ethics of ecocentrism, of social ecology - as a self-proclaimed new-humanist' form of ecological ethics - and of eco-Marxism - an example of an ecological philosophy that claims to 'transcend' the ecocentric-anthropocentric divide. This shows that there is an 'embedded humanism' withinecocentrism that provides the resources to move beyond the ecocentric-anthropocentric dichotomy. The analysis also shows, however, that this dichotomised framework distorts the understanding of substantive moral positions in the debate that has taken place between thinkers from different ecologicalschools. The failure of ecocentrism lies not in its substantive moral position, but in its attempt to render the justification for preservationism non-contingent.The insights drawn from the analytical sections are pulled together in the final chapter in order to suggest a basis for justifying nature preservation as a public policy that escapes the sterile, distorting ecocentric-anthropocentric dichotomy. The author claims that an argument from 'strong irreplaceability', compatible with both human-centered and nature-centered concerns, provides the strongest grounds for the justification of a public policy of nature preservation.

Forfattere
Bibliotekernes beskrivelse The philosophy of nature preservation has focused on whether arguments for nature preservation should be centred on the value of nature itself (ecocentrism) or derived human benefits (anthropocentrism). This book argues that this way of thinking has been counter-productive for environmental ethics.