Pray Until Something Happens: Releasing the Authority of the Kingdom Through your Words, Prayers & Declarations 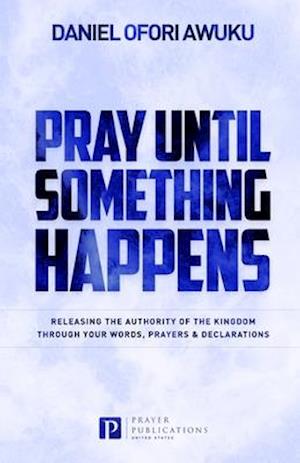 Many believers leave the altar too early without saying enough prayers to get to the root of their problems. It is an attack from the devil and the goal is to stop you from praying and make you retire in defeat. You will be left complaining and giving excuses while your problem persists. In the ministry of prayer, we have all manner of prayers, levels and volumes.

All the weapons you need to defeat the devil and fulfil destiny are available but you have to put them on before entering into battle. Many believers who profess strong faith in Christ have fallen on the day of battle because they did not realize how trickish and manipulative the devil can be. They forgot or were not aware that a battle was going on. Satan manipulated them into not fighting or even made them believe that there was no need to resist him. God made his weapons available but they failed to use them. They failed to put them on to resist the demonic activities in their lives. They lived in ignorance, manipulation and bewitchment. They lived an impotent, cold and fruitless lifestyle from birth to death. Believers are called to put on the whole armor of God. They are called to warfare in order to put the devil to flight. Eve failed and many are still failing to resist the devil. However, now that you are alive, you can start now to resist the devil and his activities until he flees. You can pray and something will happen. That is the purpose of this book: to pray until something happens.