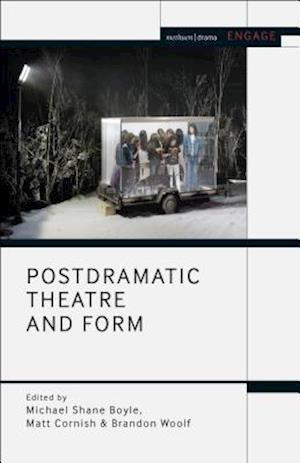 Postdramatic theatre is an essential category of performance that challenges classical elements of drama, including the centrality of plot and character. Tracking key developments in contemporary European and North American performance, this collection redirects ongoing debates about postdramatic theatre, turning attention to the overlooked issue on which they hinge: form. Contributors draw on literary studies, film studies and critical theory to reimagine the formal aspects of theatre, such as space, media and text. The volume expands how scholars think of theatrical form, insisting that formalist analysis can be useful for studying the ways theatre is produced and consumed, and how theatre makers engage with other forms like dance and visual art. Chapters focus on a range of interdisciplinary artists including Tadeusz Kantor, Ann Liv Young and Ryan Trecartin and Lizzie Fitch, as well as theatre's enmeshment within institutional formations like funding agencies, festivals, real estate and healthcare. A timely investigation of the aesthetic structures and material conditions of contemporary performance, this collection refines what we mean, and what we don't, when we speak of postdramatic theatre.