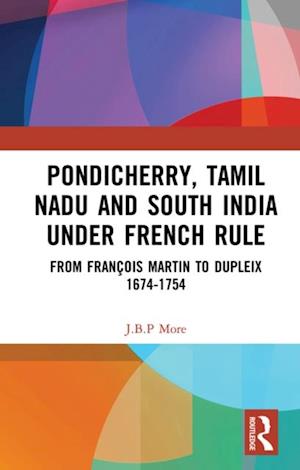 This is a study of the colonization of Pondicherry, Tamil Nadu and South India by the French during the eighteenth century, and their interactions with the Indian rulers and populations in the political, economic, social and religious spheres. French Governors based in Pondicherry since Francois Martin up to Dupleix never acquired any territory for France through outright conquest. They or their masters in France never had any grand plan to establish a French empire in India. Some Indian rulers were friendly with the French and the English as it served their interests. The study demonstrates that the French colonizers and missionaries would not have survived in India without the collaboration of the Indian dubashes, merchants, certain Indian rulers and military men.This collaboration was not on an equal footing, as the sepoys, merchants and dubashes were always subordinate and submissive to the Europeans. Even Ananda Ranga Poulle, the most famous of the Indian dubashes had to resort to the art of flattery to be in the good books of his 'master'. European arrival and presence in India heralded the beginning of a cultural clash between the Europeans and Indians, in which the former had the upper hand. There was never any partnership or 'master-bania' relationship between the French and the Indians. Instead, the relationship had all the trappings of a 'master-subordinate' relationship, where the subordinate even though he might be a dubash was always at the mercy of the colonizers. The element of force, aggressivity and violence was omnipresent in European presence and expansion in India, in the political, economic and religious fields.Please note: This title is co-published with X. Taylor & Francis does not sell or distribute the Hardback in India, Pakistan, Nepal, Bhutan, Bangladesh and Sri Lanka.