- Towards a Political Phiosophy of Continental Thought 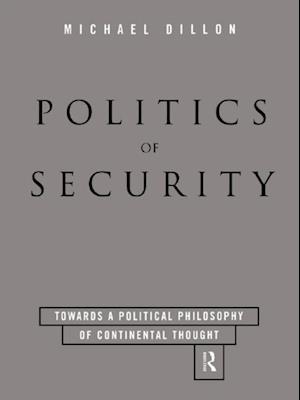 In this critique of security studies, with insights into the thinking of Heidegger, Foucault, Derrida, Levinas and Arendt, Michael Dillon contributes to the rethinking of some of the fundamentals of international politics developing what might be called a political philosophy of continental thought. Drawing on the work of Martin Heidegger, Politics of Security establishes the relationship between Heidegger's readical hermeneutical phenomenology and politics and the fundamental link between politics, the tragic and the ethical. It breaks new ground by providing an etymology of security, tracing the word back to the Greek asphaleia (not to trip up or fall down), and a unique political reading of Oedipus Rex . Michael Dillon traces the roots of desire for security to the metaphysical desire for certitude, and points out that our way of seeking that security is embedded in 20th century technology, thus resulting in a global crisis. Politics of Security will be invaluable to both political theorists and philosophers, and to anyone concerned with international relations, continental philosophy or the work of Martin Heidegger.