- With an Introduction, Two Prefatory Essays and Notes Critical and Explanatory (Volume 4: Essay on Constitutions; Books VI-VIII - Text and Notes) 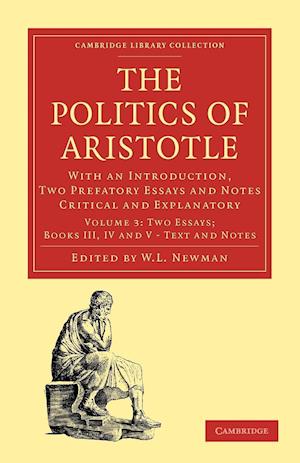 William L. Newman (1834-1923) published Volume 3 of Politics of Aristotle in 1902. It contains his reconstructed text of books 3-5 with critical notes, commentary, and an introduction to the manuscript sources. Newman's reconstructed text is based on the edition of Susemihl (1872) and his own fresh collations of a number of manuscripts, including MS. Phillipps 891 (z), which contains William of Moerbeke's Latin translation. Newman's cautious text, always supported by extensive manuscript evidence, was widely regarded as an improvement on Bekker's more conjectural 1837 version. Newman's detailed commentary was highly praised and has been used for over a century by students of the Politics. As a scholar and pedagogue Newman had a significant impact on nineteenth-century classical studies. His four-volume edition of the Politics stands as a monument of Victorian scholarship and will continue to be read and studied by scholars and students of Aristotle.

Forfattere
Bibliotekernes beskrivelse Volume 3 of Politics of Aristotle (1902) contains Newman's reconstructed text of books 3-5 of the Politics with critical notes, commentary, and an introduction to the manuscript sources. Newman's work is a monument of Victorian scholarship and will continue to be read by scholars and students of Aristotle. Worked examples or Exercises