Politics, Finance and the Role of Economics

- An Essay on the Control of Public Enterprise 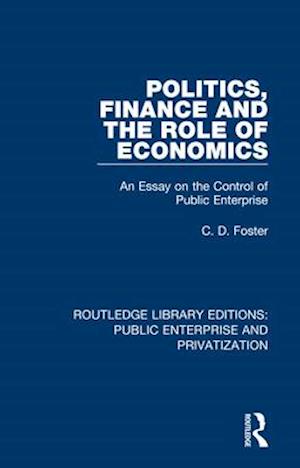 Originally published in 1971, when nationalized industries employed about 7 per cent of the national labour force, created about 10 per cent of the gross domestic product and had annual investment programmes which were equal to those of all private manufacturing put together. Even this understates the scope of public enterprise at the time, since there were many other organizations, ranging from the BBC to the Public Trustee, which were semi-autonomous public enterprises, but not nationalized industries. Moreover, the public enterprise sector continued to grow, even under Conservative governments, and there were many reasons for thinking that no government would succeed in reversing this trend, for it was felt unlikely that, as government became more complex, it would disgorge many new activities which would be given a semi-autonomous, that is, public enterprise status.The author, drawing on personal experience, shows that the facts of ministerial and parliamentary control were very different from what the public and Parliament thought at the time. He describes the very great practical independence of the Boards and also how much Ministers had come to rely on persuasion (which not only can impose serious waste of time and money on both Boards and Government but is also inefficient). Ministers have least power where the aims of public enterprise are social rather than commercial.If there were no changes, the growth of public enterprise to achieve social purposes would mean an important decline in the power of Parliament and Ministers. This book explores solutions to this problem and concludes that the government must build up a cadre and capacity for financial control which at the time were lacking to it.