- A Study in Government 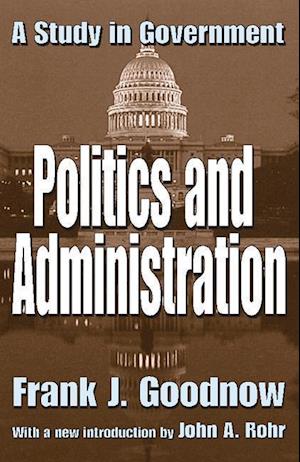 The conventional model for explaining the uniqueness of American democracy is its division between executive, legislative, and judicial functions. It was the great contribution of Frank J. Goodnow to codify a less obvious, but no less profound element: the distinction between politics and policies, principles and operations. He showed how the United States went beyond a nation based on government by gentlemen and then one based on the spoils system brought about by the Jacksonian revolt against the Eastern Establishment, into a government that separated political officials from civil administrators.Goodnow contends that the civil service reformers persuasively argued that the separation of administration from politics, far from destroying the democratic links with the people, actually served to enhance democracy. While John Rohr, in his outstanding new introduction carefully notes loopholes in the theoretical scaffold of Goodnow's argument, he is also careful to express his appreciation of the pragmatic ground for this new sense of government as needing a partnership of the elected and the appointed.Goodnow was profoundly influenced by European currents, especially the Hegelian. As a result, the work aims at a political philosophy meant to move considerably beyond the purely pragmatic needs of government. For it was the relationships, the need for national unity in a country that was devised to account for and accommodate pluralism and diversity, that attracted Goodnow's legal background and normative impulses alike. That issues of legitimacy and power distribution were never entirely resolved by Goodnow does not alter the fact that this is perhaps the most important work, along with that of James Bryce, to emerge from this formative period to connect processes of governance with systems of democracy.

Forfattere
Bibliotekernes beskrivelse This work contends that the civil service reformers persuasively argued that the separation of administration from politics, far from destroying the democratic links with the people, actually served to enhance democracy.