- From Make America Great Again to Stronger Together

indgår i serie Sociocultural, Political, and Historical Studies in Education 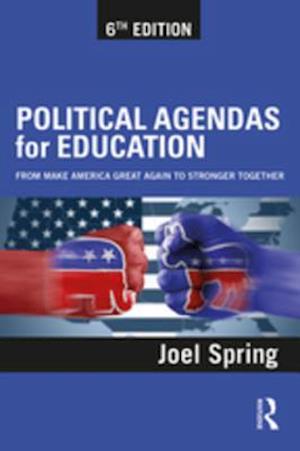 Following the epic, contentious 2016 presidential election, Joel Spring's ongoing documentation and analysis of political agendas for education reflect the major political issues since 2012. Here he examines the 2016 education planks of the Republican, Democratic, Libertarian, and Green Parties, using their official platforms and other statements, speeches given by each candidate, and media reports and publications. Each party's position is linked to previous political movements in education. Spring offers an alternative agenda for American schools, including a proposed education amendment to the U.S. Constitution and replacing human capital agendas with goals emphasizing education for a long life and happiness. Taking a fresh look at the social and political forces, educational research, and ideologies shaping their educational agendas and a comparative approach, the book stimulates reflection and discussion.Updates and changes in the Sixth Edition:Betsy DeVos's education agenda supporting vouchers, free market competition and for-profit schools and its relationship to the education section of the 2016 Republican platformThe important role religion and culture played in the evolution of Republican education policies after the school prayer and Bible decisions of the 1960sThe influence of human capital economics on Democratic education proposalsHow No Child Left Behind and Democratic President Barack Obama opened doors to the growth of the for-profit education industry and investment bankersThe 2016 Democratic positions on the cost of higher education and student loan debtsThe Democratic left as represented by the 2016 campaign of Democrat Bernie Sanders and his influence on the presidential candidate Hillary Clinton and the Democratic Party platformThe education proposals of the Green and Libertarian parties