Poetry and Criticism before Plato 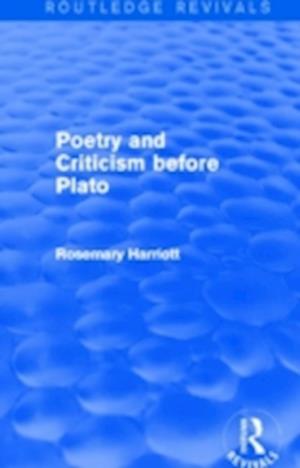 Aristotle is justly famed as the founder of literary criticism, but he was not its inventor: his approach was shaped, not only by the ideas newly current in the fourth century, but also by the literature, critical attitudes and language which he inherited. It is this inheritance which concerns the author of Poetry and Criticism Before Plato, first published in 1969: setting the words of poets and critics side by side. The relationship between the poets and the Muses, and Plato's account of poetic inspiration and metaphorical language are both discussed. In the later chapters Professor Harriott traces the emergence of critical techniques and vocabulary as revealed in the writings of philosophers, sophists and dramatists. Finally, the two surviving passages of practical criticism are investigated: the literary contest between Aeschylus and Euripides in the Frogs of Aristophanes and Socrates' exegesis of a poem by Simonides in Plato's Protagoras.