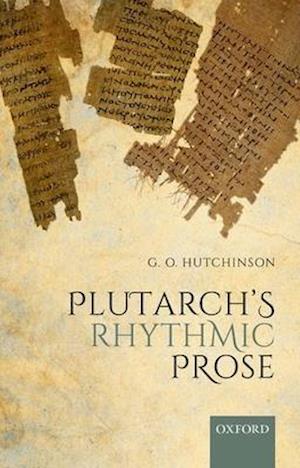 Greek literature is divided, like many literatures, into poetry and prose, but in Greek the difference between them is not that all prose is devoid of firm rhythmic patterning. In the earlier Roman Empire, from 31 BC to about AD 300, much Greek (and Latin) prose was actually written to follow one organized rhythmic system. How much Greek prose adopted this patterning has hitherto been quite unclear; the present volume for the first time establishes an answer on anadequate basis: substantial data drawn from numerous authors. It constitutes the first extensive study of prose-rhythm in later Greek literature.The book focuses particularly on one of the greatest Imperial works: Plutarch's Lives. It rests on a scansion of the whole work, almost 100,000 phrases. Rhythm is seen to make a vital contribution to the literary analysis of Plutarch's writing, and prose-rhythm is revealed as a means of expression, which draws attention to words and word-groups. Some passages in the Lives pack rhythms together more closely than others; much of the discussion concentrates on such rhythmicallydense passages, examining them in detail in commentary form. These passages do not occur randomly, but attract attention to themselves. They are marked out as climactic in the narrative, or as in other ways of highlighted significance: joyful summations, responses to catastrophe, husbands and wives, fathers and sonscompared. These remarkable passages make apparent the greatness of Plutarch as a prose-writer - a side of him fairly little considered amid the huge resurgence of work on Plutarch as an author and as a major historical source. Some passages from three Greek novelists, both rhythmic and unrhythmic, are closely analysed too. The book demonstrates how rhythm can be integrated with other aspects of criticism, and how it has the ability to open up new vistas on three prolific centuries ofliterary history.

Forfattere
Bibliotekernes beskrivelse In the earlier Roman Empire much Greek prose followed one organized rhythmic system, a bit like poetry. This volume focuses on Plutarch's Lives and offers the first detailed study of prose-rhythm in later Greek literature; it demonstrates its importance as a dynamic means of expression and its untapped potential as a tool for literary analysis.