Plus One Plus None 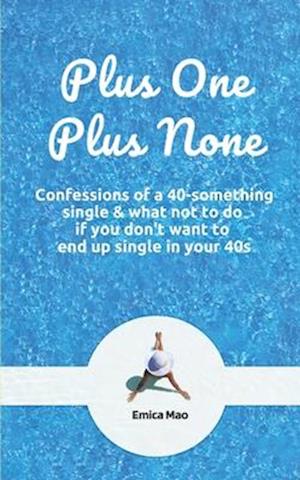 Have you ever wondered why are you still single or ended up single?

Like most girls, when Zita was in her 20s, she felt like she had all the time in the world and everything would just fall into place within the usual timeline like getting married and having kids during one's prime years. Except that things did not turn out the way she expected them to be.

Plus One Plus None is a short and candid monologue of a single introvert named Zita. In the book, she retells her story as how it unfolded. She shares her unfiltered thoughts, reflections, actions and inactions, mistakes, imperfections and realizations at every stage in her life. Her musings and anecdotes include various topics from dating, pursuing personal goals, dealing with intrusive questions like "how old are you?" and "when will you get married?", to facing the possibility of not being able to marry and get pregnant within one's prime years, and coming to grips with the possibility of staying unmarried and growing old alone.

Who may learn from Zita's story?

- the single who says she's too busy to date;

- the single who says she hasn't found The One yet coz she doesn't get to meet a lot of people;

- the shy single or the homebody single who doesn't go out a lot but wishes to find a boyfriend soon;

- the choosy single who starts zoning out the moment she spots something she doesn't like about her date or who refuses to go out on a second date when the guy isn't her type;

- the praying single who solely relies on God to send her a Plus One;

- the single who says she wants to get married and have kids someday but her actions and words don't seem to be in sync;

- the single who occasionally wonders why is she still unattached or ended up single;

- the single who banks on pure hope and luck in meeting her Plus One someday; and

- the single who claims every new year is going to be "the year" but nothing different happens each year.

Just remember - each person has different values, fears, challenges, imperfections and reasons for being single and though Zita's circumstances maybe different from yours, consider her story as a cautionary tale to reflect where you are right now in your single life and to determine what needs to be done to make things happen in your life within your target timeline.

If you are single and you are already doing something about your single situation, or you never run out of dates, or you love to go out to mingle, or you are right on track with your relationship goals, there is no need to read Zita's story unless you're curious to learn about one's story of unexpected spinsterhood and make sure you don't end up in a similar path.

Plus One Plus None is a short and concise read that gives a snapshot of single woman's introspection of 15 years of her single life in 130 pages for paperback and 170 pages on kindle.

Don't let another year quickly slip away only to realize that you are one year older and nothing different happened in your single life again. Get a copy of Plus One Plus None today.