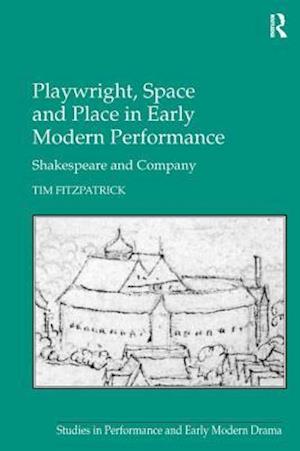 Analyzing Elizabethan and Jacobean playtexts for their spatial implications, this innovative study discloses the extent to which the resources and constraints of public playhouse buildings affected the construction of the fictional worlds of early modern plays. The study argues that playwrights were writing with foresight, inscribing the constraints and resources of the stages into their texts. It goes further, to posit that Shakespeare and his playwright-contemporaries adhered to a set of generic conventions, rather than specific local company practices, about how space and place were to be related in performance: the playwrights constituted thus an overarching virtual 'company' producing playtexts that shared features across the acting companies and playhouses. By clarifying a sixteenth- to seventeenth-century conception of theatrical place, Tim Fitzpatrick adds a new layer of meaning to our understanding of the plays. His approach adds a new dimension to these particular documents which-though many of them are considered of great literary worth-were not originally generated for any other reason than to be performed within a specific performance context. The fact that the playwrights were aware of the features of this performance tradition makes their texts a potential mine of performance information, and casts light back on the texts themselves: if some of their meanings are 'spatial', these will have been missed by purely literary tools of analysis.

Forfattere
Bibliotekernes beskrivelse Analyzing Elizabethan and Jacobean playtexts for their spatial implications, this title discloses the extent to which the resources and constraints of public playhouse buildings affected the construction of the fictional worlds of early modern plays.