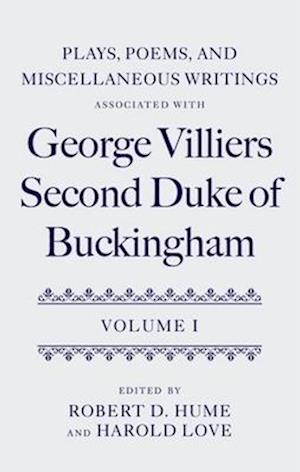 George Villiers, Second Duke of Buckingham (1628-1687) was one of the most scandalous and controversial figures of the Restoration period. He was the principal author of The Rehearsal (1671), an enormously successful burlesque play that ridiculed John Dryden and the rhymed heroic drama. Historians remember Buckingham as an opponent who helped topple Clarendon from power in 1667, as a member of the 'Cabal' government in the early 1670s, and as an ally of theEarl of Shaftesbury in the political crisis of 1678-1683. The duke was prominent among the 'court wits' (Rochester, Etherege, Sedley, Dorset, Wycherley, and their circle); he was closely associated with such writers as Butler and Cowley; he was a conspicuous champion of religious toleration and a friend ofWilliam Penn. No edition of Buckingham has been published since 1775, partly because his work presents horrendous attribution problems. He was (probably) adapter or co-author of six plays (two of them vastly successful for more than a century) including one in French that appears here in English for the first time. He is also associated with nine topical pieces (variously political, religious, and satiric) and some twenty poems of wildly varying type. The 'Buckingham' commonplace book haspreviously been published only in fragmentary form. Almost all of these works present major difficulties in both attribution and annotation, here seriously addressed for the first time. This edition is a companion venture to Harold Love's important edition of Rochester (OUP, 1999).

Forfattere
Bibliotekernes beskrivelse George Villiers, Second Duke of Buckingham, was one of the most scandalous and controversial figures of the late seventeenth century. This is the first edition of his writings to be published since 1775. Almost all of his works present major difficulties in both attribution and annotation, here seriously addressed for the first time. 3 b/w in-text