Planting Pumpkins on the Moon 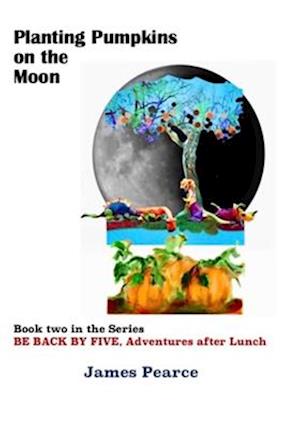 Dino's family moved to the neighborhood a year and a half ago. Every month, on a Saturday, Dino and his friends that he has made in elementary school, get together and make up an Adventure. This month, Dino's friend Albert wants to Plant Pumpkins on the Moon.

The story begins early one Saturday morning at Dino's house. Dino is making up a poem that sounds to Albert and Tyrone more like a Halloween poem. Albert reminds him that Halloween was last month. But, all three start rhyming until a storm passes with lightening and thunder, causing everyone to jump. The lights go back on and every one has jumped to safety on Tyrone. The door to Dino's room opens and from behind the door they hear a whisper saying "Evermore".

It turns out Tyrone was playing a trick from last month, but Albert is upset. Tyrone apologizes and reminds Albert that everyone is looking forward his idea for this Saturday's Adventure, Planting Pumpkins on the Moon. The Quintuplets call to be sure Albert's going to join them at the park, because they are already practicing how they are going to land on the Moon.

How are Dino and his friends going to plant pumpkins on the Moon, find out if there really is a "Dinosaur in the Moon" like the story says, and is the Moon really made of green cheese. These are some of the questions that this month's adventure should be able to answer. Dino has called Channel 8 to make sure it is windy enough, Tyrone has the Merry-go-Round ready, Shelly and the Quintuplets are ready to go down the slide so they can make it up all the way to the Moon.

It turns out that the Moon is not quite what they expected. These and other basic scientific questions are answered, and the crew manage a landing, after planting pumpkins on the moon and the park. Tyrone will be able to complete his Top-Secret Mission. This is the second adventure that these prehistoric Elementary School children have attempted. Unlike their first adventure, with everyone going on their own adventures, GROWING PUMPKINS ON THE MOON focuses on the complexities, challenges, and the collaborative creativity it takes to realize their cohesive Adventure. This is the second book in the BE HOME BY FIVE series, and includes short biographies of the cast of characters that tell the story.