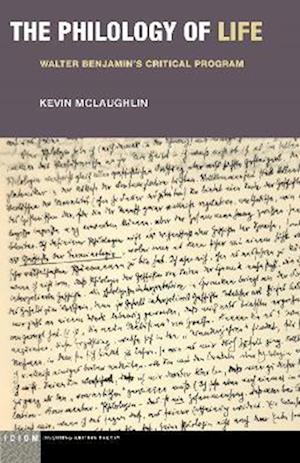 The Philology of Life retraces the outlines of the philological project developed by Walter Benjamin in his early essays on Holderlin, the Romantics, and Goethe. This philological program, McLaughlin shows, provides the methodological key to Benjamin's work as a whole. According to Benjamin, German literary history in the period roughly following the first World War was part of a wider 'crisis of historical experience'-a life crisis to which Lebensphilosophie (philosophy of life) had instructively but insufficiently responded. Benjamin's literary critical struggle during these years consisted in developing a philology of literary historical experience and of life that is rooted in an encounter with a written image.The fundamental importance of this 'philological' method in Benjamin's work seems not to have been recognized by his contemporary readers, including Theodor Adorno who considered the approach to be lacking in dialectical rigor. This facet of Benjamin's work was also elided in the postwar publications of his writings, both in German and English. In recent decades, the publication of a wider range of Benjamin's writings has made it possible to retrace the outlines of a distinctive philological project that starts to develop in his early literary criticism and that extends into the late studies of Baudelaire and Paris. By bringing this innovative method to light this study proposes 'the philology of life' as the key to the critical program of one of the most influential intellectual figures in the humanities.