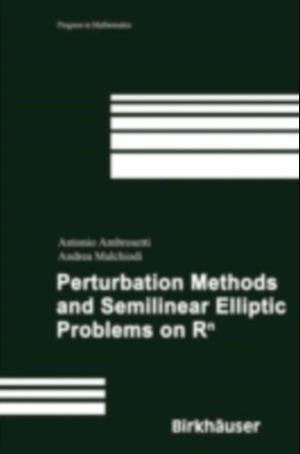 Several important problems arising in Physics, Di?erential Geometry and other n topics lead to consider semilinear variational elliptic equations on R and a great deal of work has been devoted to their study. From the mathematical point of view, the main interest relies on the fact that the tools of Nonlinear Functional Analysis, based on compactness arguments, in general cannot be used, at least in a straightforward way, and some new techniques have to be developed. n On the other hand, there are several elliptic problems on R which are p- turbative in nature. In some cases there is a natural perturbation parameter, like inthe bifurcationfromthe essentialspectrum orinsingularlyperturbed equations or in the study of semiclassical standing waves for NLS. In some other circ- stances, one studies perturbations either because this is the ?rst step to obtain global results or else because it often provides a correct perspective for further global studies. For these perturbation problems a speci?c approach,that takes advantage of such a perturbative setting, seems the most appropriate. These abstract tools are provided by perturbation methods in critical point theory. Actually, it turns out that such a framework can be used to handle a large variety of equations, usually considered di?erent in nature. Theaimofthismonographistodiscusstheseabstractmethodstogetherwith their applications to several perturbation problems, whose common feature is to n involve semilinear Elliptic Partial Di?erential Equations on R with a variational structure.