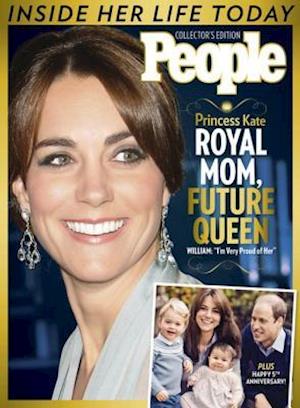 The story of Princess Kate, or as she is officially known, Catherine, Duchess of Cambridge is a true fairy tale: A solid upper middle-class upbringing in the Uk to college girlfriend to princess bride to royal mom. And though it seems like the stuff that dreams are made of, it's actually a formidable job, and Kate has proven herself to be an intelligent and deft navigator of her roles as royal wife, mother, figurehead, and advocate.In this all-new special edition from People, with over 180 photographs, Kate's evolution from middle-class young woman to modern princess-mom is traced from her early days as Prince William's girlfriend to the heady of days of 'will they or won't they?,' the engagement and wedding that captivated the world, and the birth of two adorable children who Kate and William are dedicated to raising with as much privacy as possible - at least for their early years. Also included are some of Kate's best looks, how Kate and William keep their marriage strong, her warm relationship with Queen Elizabeth, and much more.For any royal watcher, or anyone who believes that dreams can come true, Prince Kate: Royal Mom, Future Queen is required reading!