People of the Storm God 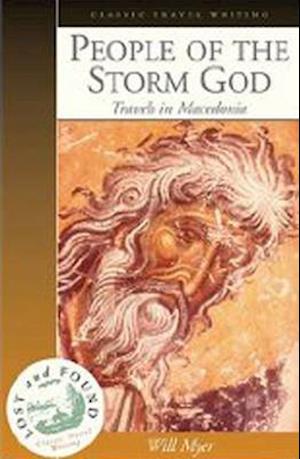 "Macedonia is a problem. It is such a problem that the French named fruit salad after it: macedoine des fruits. Four wars have been fought over it in the last eighty years, each bloodier than the previous one. They were fought to determine not only where exactly Macedonia is, but who lives there and in what state they should live." With this sense of historic complexity in mind, Will Myer travelled to the troubled Balkans in autumn 1994 and the following spring. His aim was to discover the political and human reality of a region beset by conflict and controversy, fought over for centuries by rival powers. In particular, he sought to explore the true nature of Macedonian identity, or rather of a multiple identity. Travelling in Turkey, Greece, Bulgaria and the newly independent Former Yugoslav Republic of Macedonia, Myer encounters a bewildering array of political and cultural opinions--Orthodox Christians and Muslims, Communists and nationalists, warlords and modernisers. His investigations take him to Orthodox weddings and Easter parades, political meetings and religious ceremonies. He encounters widows and witches, dervishes and mystics.Throughout, he remains fascinated by the human dimension of Macedonia's deep-seated identity crisis. More than a simple travelogue, People of the Storm God casts light on the troubled history of Macedonia and its unique melting pot of politics, religion and ethnicity. Compared to the work of Patrick Leigh Fermor, this book evocatively reveals the extraordinary cultural diversity of the Balkans and the weight of history borne by its different peoples.

Forfattere
Bibliotekernes beskrivelse A memoir of travels through the strife-torn Balkans in search of the meaning of Macedonian identity. 30 b&w photographs