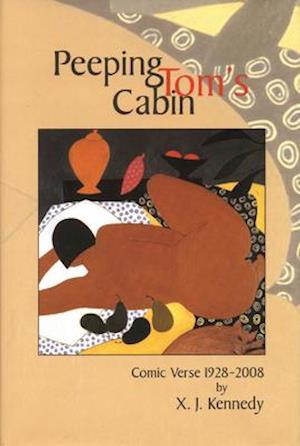 "X. J. Kennedy's well-known travels between the realms of the comic and the serious qualify him for dual citizenship in the world of poetry. Here, the playful is on full display in verse not just 'light' but bright and delightful."-Billy Collins Peeping Tom's Cabin is the first full-length collection of light verse for adults composed by one of America's most celebrated poets. An uncompromising formalist, Kennedy uses a broad range of longstanding poetic forms, including limerick, nursery rhyme, ballad, rhymed epitaph, and clerihew. This collection includes many poems previously published in poetry and popular journals, including The Sewanee Review, The Atlantic Monthly, The New Yorker, and Poetry. These poems honor and skewer all classes of citizen, regardless of their revered place in society. Parents, lovers, poetry critics, students, and especially notable literary figures receive Kennedy's astute comic attention. "To Someone Who Insisted I Look Up Someone" I rang them up while touring Timbuktu, Those bosom chums to whom you're known as "Who?" X. J.Kennedy has published six collections of verse, including Nude Descending a Staircase, which received the Lamont Award from the Academy of American Poets. His newest collection, The Lords of Misrule, received the 2004 Poets' Prize. Kennedy has also authored eighteen children's books and several textbooks on fiction and poetry. Other recognitions include the Los Angeles Book Award for Poetry, the Aiken-Taylor Award, and Guggenheim and National Arts Council fellowships. Kennedy was also given the first Michael Braude Award for light verse by the American Academy and Institute of Arts and Letters.

Forfattere
Bibliotekernes beskrivelse The first light verse collection by the internationally recognized (and hilarious) master of the form.