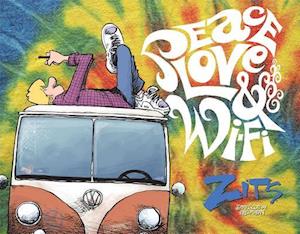 The Los Angeles Times calls Zits "one of the freshest and most imaginative comic strips." The world of sixteen-year-old Jeremy Duncan revolves around his insatiable "growing boy" appetite, lip-locking with squeeze Sarah, keeping his jerry-rigged vehicle roadworthy, and playing with his band, Goat Cheese Pizza. Somewhere in the background, he's vaguely aware of some muted voices, constantly beseeching him to pick up his Matterhorn-sized clothes pile, to be home on time (so lame ), and to (God forbid ) communicate with them. The disembodied voices are those of Connie and Walt, his mostly patient, but sometimes frustrated to exploding, parents. In Zits, they portray a hilarious view of coping with a teenager and with being a teenager. Created in 1997 by Pulitzer Prize-winning editorial cartoonist Jim Borgman and Reuben Award-winning cartoonist/writer Jerry Scott, Zits appears in more than 1,600 newspapers worldwide in 45 countries and is translated into 15 different languages. The comic has an estimated daily readership of more than 200 million readers.