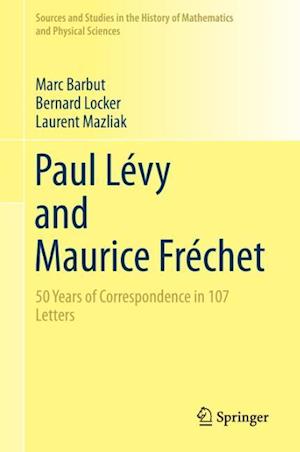 The fascinating correspondence between Paul Levy and Maurice Frechet spans an extremely active period in French mathematics during the twentieth century. The letters of these two Frenchmen show their vicissitudes of research and passionate enthusiasm for the emerging field of modern probability theory. The letters cover various topics of mathematical importance including academic careers and professional travels, issues concerning students and committees, and the difficulties both mathematicians met to be elected to the Paris Academy of Sciences.The technical questions that occupied Levy and Frechet on almost a daily basis are the primary focus of these letters, which are charged with elation, frustration and humour. Their mathematical victories and setbacks unfolded against the dramatic backdrop of the two World Wars and the occupation of France, during which Levy was obliged to go into hiding. The clear and persistent desire of these mathematicians to continue their work whatever the circumstance testifies to the enlightened spirit of their discipline which was persistent against all odds.The book contains a detailed and comprehensive introduction to the central topics of the correspondence. The original text of the letters is also annotated by numerous footnotes for helpful guidance. Paul Levy and Maurice Frechet will be useful to anybody interested in the history of mathematics in the twentieth century and, in particular, the birth of modern probability theory.