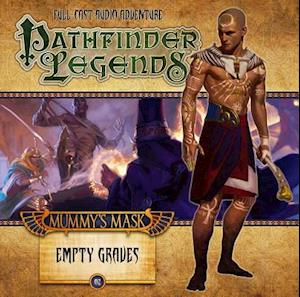 Following the opening of its necropolis, the city of Wati is overrun by hordes of the unquiet dead. The heroes must once more brave the abandoned streets and dusty tombs of Wati's necropolis in search of the powerful artifact called the mask of the Forgotten Pharaoh and the necromancer who is using it to create the undead uprising. But a group of mysterious masked cultists also seeks the artifact to bring a pharaoh from the ancient past back to life. Continuing the Mummy's Mask Adventure Path, Empty Graves is a Pathfinder Roleplaying Game adventure for 4th-level characters featuring a selection of new monsters, a double-length gazetteer presenting the gods of Ancient Osirion, and the next installment of the Pathfinder's Journal written by Amber E. Scott.