indgår i serie Publications of the Surtees Society 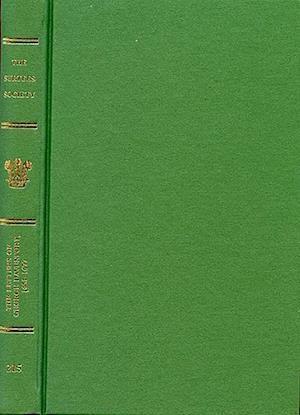 This book provides an edition of the letters of George Davenport, an Anglican clergyman in the north of England whose adult career covered the period of the Interregnum and the Restoration. Many of the letters are to his former Cambridge tutor, William Sancroft, beginning from 1651 after Sancroft had been expelled from Cambridge, and continuing after the Restoration when Davenport replaced Sancroft as chaplain to John Cosin, bishop of Durham, later becoming Rector of Houghton-le Spring, Durham. They were written to keep Sancroft supplied with information about Durham, where he was a prebendary with license to be non-resident, needing to collect revenues from his living and then to rebuild his prebendal house. The earlier letters reveal something about the life of an illegally (since episcopally) ordained young Anglican who, unlike many, did not go into exile but stayed largely in London supported by friends. Davenport eventually became a most conscientious resident parish priest and the letters throw considerable light on the Restoration settlement in the Durham diocese, from the `beautifying' of Houghton church to the catechising of the people and the collection of tithes from a sometimes tardy flock. Davenport also helped Cosin to Catalogue his famous library and himself gave many manuscripts to it, of which a list is included here as an appendix. The letters are presented here with full introduction and elucidatory notes.

Forfattere
Bibliotekernes beskrivelse Letters written by a clergyman during the late seventeenth century illuminate the religious turmoil of the period.