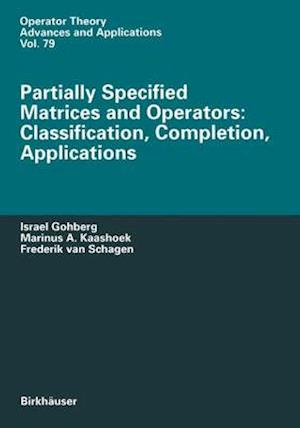 This book is devoted to a new direction in linear algebra and operator theory that deals with the invariants of partially specified matrices and operators, and with the spectral analysis of their completions. The theory developed centers around two major problems concerning matrices of which part of the entries are given and the others are unspecified. The first is a classification problem and aims at a simplification of the given part with the help of admissible similarities. The results here may be seen as a far reaching generalization of the Jordan canonical form. The second problem is called the eigenvalue completion problem and asks to describe all possible eigenvalues and their multiplicities of the matrices which one obtains by filling in the unspecified entries. Both problems are also considered in an infinite dimensional operator framework. A large part of the book deals with applications to matrix theory and analysis, namely to stabilization problems in mathematical system theory, to problems of Wiener-Hopf factorization and interpolation for matrix polynomials and rational matrix functions, to the Kronecker structure theory of linear pencils, and to non everywhere defined operators. The eigenvalue completion problem has a natural associated inverse, which appears as a restriction problem. The analysis of these two problems is often simpler when a solution of the corresponding classification problem is available.

Forfattere
Bibliotekernes beskrivelse This text explores a direction in linear algebra and operator theory dealing with the invariants of partially specified matrices and operators, and with the spectral analysis of their completions. 1 Hardback 368 p.