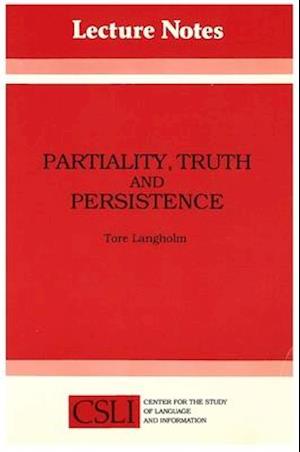 In recent years, 'semantical partiality' has emerged as an important concept in philosophical logic as well as in the study of natural language semantics. Despite the many applications, however, a number of mathematically intriguing questions associated with this concept have received only very limited attention. Partiality, Truth, and Persistence is a study in spatial model theory, the theory of partially defined models. First, with the introduction of truth value gaps in semantics, there are many ways to generalize the classical truth definition for the sentences of a first order predicate language. We know what it means for a sentence to be true or false in a classical, complete model, but how do we extend this relation when partial models are introduced? Various alternatives exist, and a detailed comparison is carried out between them. Since these studies concern a full first order predicate language, many distinctions appear that do not arise in the case of pure propositional logic. A condition of monotonicity or 'persistence' of truth relative to partial models has a prominent position among conditions that are not expressible in the framework of standard, complete model theory. The final chapter investigates the relation between such conditions and expressibility properties in general. These discussions culminate with a combined Lindstrom and persistence characterization theorem. Tore Langholm is a research fellow in mathematics at the University of Oslo. He is a co-author of Situations, Language and Logic.