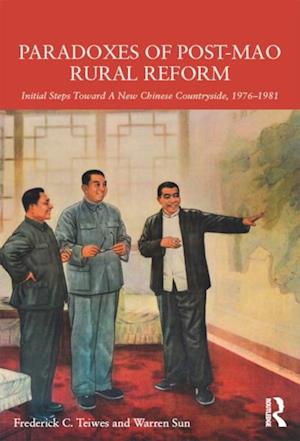 The decollectivization of Chinese agriculture in the early post-Mao period is widely recognized as a critical part of the overall reform program. But the political process leading to this outcome is poorly understood. A number of approaches have dominated the existing literature: 1) a power/policy struggle between Hua Guofeng's alleged neo-Maoists and Deng Xiaoping's reform coalition; 2) the power of the peasants; and 3) the leading role of provincial reformers. The first has no validity, while second and third must be viewed through more complex lenses.This study provides a new interpretation challenging conventional wisdom. Its key finding is that a game changer emerged in spring 1980 at the time Deng replaced Hua as CCP leader, but the significant change in policy was not a product of any clash between these two leaders. Instead, Deng endorsed Zhao Ziyang's policy initiative that shifted emphasis away from Hua's pro-peasant policy of increased resources to the countryside, to a pro-state policy that reduced the rural burden on national coffers. To replace the financial resources, policy measures including household farming were implemented with considerable provincial variations. The major unexpected production increases in 1982 confirmed the arrival of decollectivization as the template on the ground. The dynamics of this policy change has never been adequately explained.Paradoxes of Post-Mao Rural Reform offers a deep empirical study of critical developments involving politics from the highest levels in Beijing to China's villages, and in the process challenges many broader accepted interpretations of the politics of reform. It is essential reading for students and scholars of contemporary Chinese political history.