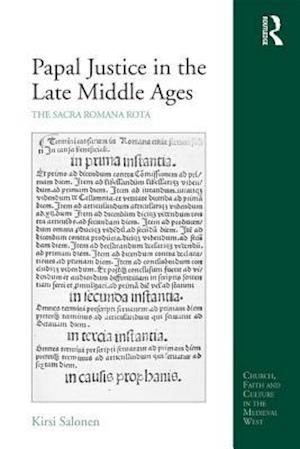 This is a study of the history and function of the highest ecclesiastical tribunal, the Sacra Romana Rota, from the twelfth to the sixteenth centuries. Despite its importance for Christendom and in contrast with other important papal offices, the activity of the Rota has never been thoroughly investigated on the basis of archival sources, in large part due to the vast source material and the perceived 'difficulty' of the subject. This book fills this significant gap by explaining how the Rota functioned-its organization, the phases of a Rota process, everyday practices at the tribunal-and the kinds of issues it handled, where the processes originated from and how long they lasted. The study demonstrates that the Rota dealt with a range of cases much broader than has previously been acknowledged, whilst also confirming that the tribunal mainly oversaw litigation over benefices. The results of this research reveal the true role of the Rota and its significance for Christians from the middle ages to the dawn of the Reformation.