- The illustrated history of German armour in WWII 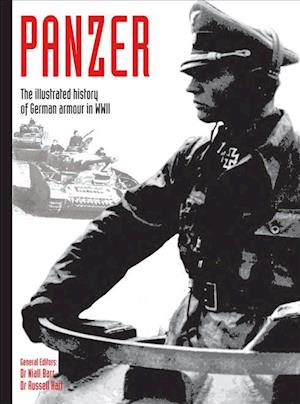 German armoured forces were a key component of the Wehrmacht's Blitzkrieg ('Lightning War') tactics that quickly conquered Poland, the Low Countries and France in 1939 and 1940. Germany introduced a new style of mechanised warfare that surprised the Allies and allowed the German forces to overwhelm often numerically superior forces in France and Russia. However, as the war progressed the Allies learned how to counter the German tactics, and in the final years of the war German armour was on the defensive. Large, powerful tanks and self-propelled guns - such as the Tiger, King Tiger and Jagdtiger - became key to the defence of the Reich as the Allied armies closed on the Fatherland.Panzer provides a full pictorial record of the German armoured forces, from the Blitzkrieg years to the last stand in Berlin. The book features key figures, such as panzer generals Hoth and Guderian, and also Panzer aces Michael Wittmann and Joachim Peiper.

Forfattere
Bibliotekernes beskrivelse With over 200 photos, Panzer provides a full pictorial history of the vehicles and key figures of the German armoured forces in WWII, from the Blitzkrieg invasions of Poland and France to the last stand in Berlin. 250 b&w photos; 250 Illustrations, unspecified