Pai Gow Tiles: How to Play, Score, and Win 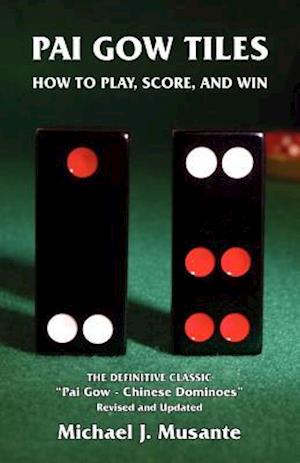 LEARN THE SECRETS OF THE TILES! Pai Gow Tiles is "the thinking person's casino game". It's played in casinos throughout the United States, including places like Las Vegas, New Jersey, and California. Exotic and engaging, it combines skill and luck and-for the knowledgeable player, Pai Gow is also one of the fairest games offered in casinos and cardrooms. It may seem mysterious at first, but you'll soon see that the game is actually pretty simple to learn, challenging to master, fun and sociable, and a great table game for preserving your bankroll. In 1981, Michael Musante was Supervisor of Oriental Games at the Sahara Hotel in Las Vegas when he self-published a little book entitled Pai Gow - Chinese Dominoes. It was the first English-language book to comprehensively explain the game. In fact "the Musante House Way"-based on the first edition-is the foundation for the house way in many casinos. After 30 years, that book is acknowledged as a gaming classic with some online sellers asking hundreds of dollars for a used copy. This book revisits the original edition and contains extensive updates, all-new graphics, and additional insights into this ancient game. You'll get an outstanding introduction to the lore, rules, and strategy of Pai Gow and a variety of tips and techniques for mastering the tiles. Also included are several suggestions to improve your play, as well as a first-of-its-kind chapter on how to memorize the order of the tiles. With this book and a bit of practice, you'll be able to play intelligently and with confidence! ABOUT THE AUTHOR Michael J. Musante is considered one of the foremost authorities on the game of Pai Gow in the United States. He was instrumental in establishing the first "legal" game of Pai Gow in California at the Huntington Park Casino. He trained the dealers, supervisors and surveillance personnel for Pai Gow at the Casino de Quebec in Hull. He also was an expert witness for the County of Los Angeles in a case involving the legality of Pai Gow in California. Mr. Musante has been in and around the gaming industry for the last forty years. He has worked in three major resort areas of Nevada: Lake Tahoe, Reno, and Las Vegas. He has dealt and supervised every game offered in a casino including "21", Craps, Roulette and Baccarat and was also one of the first Occidentals to have ever dealt the game of Pai Gow in a North American gaming establishment.