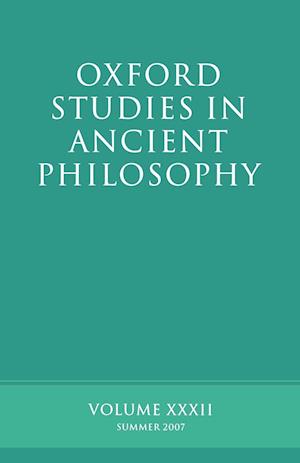 Oxford Studies in Ancient Philosophy is a volume of original articles on all aspects of ancient philosophy. The articles may be of substantial length, and include critical notices of major books. OSAP is now published twice yearly, in both hardback and paperback. This volume features six pieces about Aristotle and five about Plato and Socrates. 'The serial Oxford Studies in Ancient Philosophy (OSAP) is fairlyregarded as the leading venue for publication in ancient philosophy. Itis where one looks to find the state-of-the-art. That the serial, whichpresents itself more as an anthology than as a journal, hastraditionally allowed space for lengthier studies, has tended only toadd to its prestige; it is as if OSAP thus declares that, since itallows as much space as the merits of the subject require, it can bemore entirely devoted to the best and most serious scholarship. 'Michael Pakaluk, Bryn Mawr Classical Review