Outer Planets and their Moons 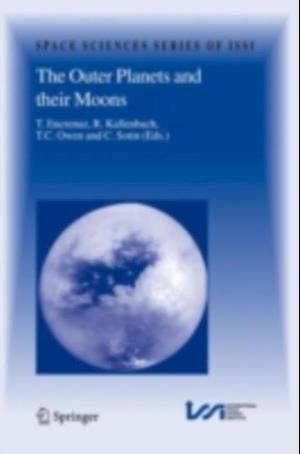 This volume gives an integrated summary of the science related to the four giant planets in our solar system. It is the result of an ISSI workshop on 'A comparative study of the outer planets before the exploration of Saturn by Cassini-Huygens' which was held at ISSI in Bern on January 12-16, 2004. Representatives of several scientific communities, such as planetary scientists, astronomers, space physicists, chemists and astrobiologists have met with the aim to review the knowledge on four major themes: (1) the study of the formation and evolution processes of the outer planets and their satellites, beginning with the formation of compounds and planetesimals in the solar nebula, and the subsequent evolution of the interiors of the outer planets, (2) a comparative study of the atmospheres of the outer planets and Titan, (3) the study of the planetary magnetospheres and their interactions with the solar wind, and (4) the formation and properties of satellites and rings, including their interiors, surfaces, and their interaction with the solar wind and the magnetospheres of the outer planets. Beyond these topics, the implications for the prebiotic chemical evolution on Europa and Titan are reviewed.The volume is intended to provide active researchers in the fields of planetary and solar system science, space plasma physics, and astrobiology with an up-to-date status report on the topic, and also to serve graduate students with introductory material into the field. At the time of publication of this book, the study of the outer planets is particularly motivated by the fact that the Saturn system is being investigated by the Cassini-Huygens mission.