Out of This World Paper Airplanes Kit 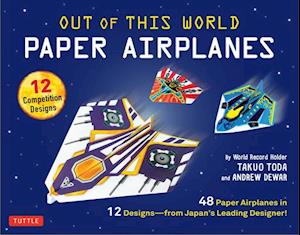 Fold and launch world record-setting paper airplanes!Paper airplane aficionados watched in awe when Takuo Toda launched his Zero Fighter and set the current Guinness World Record for longest paper airplane flight duration. This landmark kit marks the first time this celebrity paper airplane designer's models have been published outside of Japan-and his fans have been waiting! Toda is a legend with his own museum, where he exhibits his more than 700 original airplane and spaceship designs-including many award-winners. In this airplane kit, Toda shares his 12 best designs, including his Zero Fighter and three signature space shuttles. These high-performance papers have folding lines already printed on them, so they are easy to fold. No glue or other materials are needed-everything is right in the box! The accompanying 64-page full-color book presents the full history of Toda's work as well as simple step-by-step instructions and flying tips. The 12 models in this kit include: The Stag Beetle The Shooter The Icarus The Jupiter Space Shuttle And the world-record holding Zero Fighter!