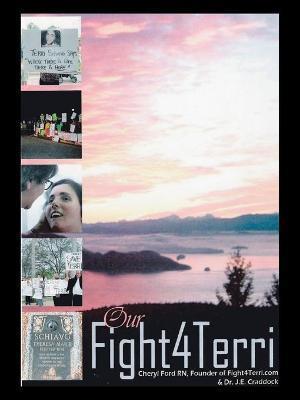 Finally, a single sourcebook of the evidence that seeks to refute the travesty of justice and lies that kept Terri hostage all these years. See the documents that allowed Felos, Bushnell, and Schiavo to march their charade of hearsay and falsities through Greer's court and the 2nd DCA with impunity. The response to the information in this book must be heard by those in power with the ability to stop the judicial madness hell-bent on legalizing euthanasia, at least long enough to investigate the underlying motivations of the powers driving this case to the inevitable death of Terri. Read the actual documents and decide for yourself! Our Fight4Terri has revealed new interpretations of all the events surrounding Terri's "collapse." This book has introduced the truth behind her injuries, the most likely cause of such massive acute trauma, and the failure of our society to protect Terri and to treat her injuries. This book also sheds new light on the character of Michael Schiavo and the relationship he shared with Terri...a relationship that, in the opinion of the authors and that of many experts, teetered on the brink of divorce and domestic violence. This relationship has been attested to by numerous eye witnesses and documented testimony.

This book exposes what the authors feel to be the lack of character and professional integrity that would lead Felos and Bushnell to lower themselves to the "FABAL" incident and the appearance of the Bar Association's "complicity by design" in its efforts to protect its members from the consequences of misconduct. Our Fight4Terri reveals a tremendous amount of evidence that proves, once and for all, that Terri was not in a PVS or any other bogus and antiquated "condition" invented solely for the purpose of measuring an appropriate timing for euthanasia. Read about numerous new advances in medicine and research that patients like Terri are benefiting from. See how the "powers that be" respond to exposure of the state's laws and regulations. Read exposed examples of the very Medicare fraud and violations that were specifically cited in the Medicare Bulletin issued by their Office of the Inspector General. At almost exactly the same time Terri was illegally admitted to the hospice unit, a Medicare Fraud Bulletin was issued to investigators to look out for patients being prematurely admitted to hospice facilities in order to access those benefits. They also cited a large increase in fraudulent certifications of patients as terminally ill who were not, and therefore did not qualify for hospice care. Read the revelation of what is, at best, a miserable failure in the operations of AHCA, the Agency for Health Care Administration, a state agency under direct oversight of Jeb Bush. And finally, but certainly not at its end, read about the consequences and danger to millions of disabled and elderly Americans in the wake of Terri's death.