indgår i serie ENCYCLOPEDIA OF MATHEMATICS AND ITS APPLICATIONS 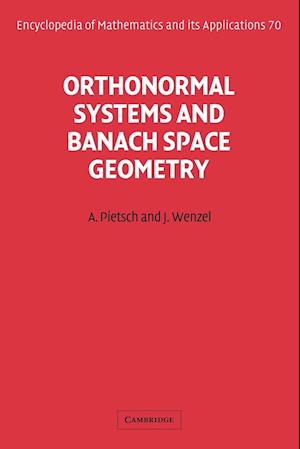 Orthonormal Systems and Banach Space Geometry describes the interplay between orthonormal expansions and Banach space geometry. Using harmonic analysis as a starting platform, classical inequalities and special functions are used to study orthonormal systems leading to an understanding of the advantages of systems consisting of characters on compact Abelian groups. Probabilistic concepts such as random variables and martingales are employed and Ramsey's theorem is used to study the theory of super-reflexivity. The text yields a detailed insight into concepts including type and co-type of Banach spaces, B-convexity, super-reflexivity, the vector-valued Fourier transform, the vector-valued Hilbert transform and the unconditionality property for martingale differences (UMD). A long list of unsolved problems is included as a starting point for research. This book should be accessible to graduate students and researchers with some basic knowledge of Banach space theory, real analysis, probability and algebra.