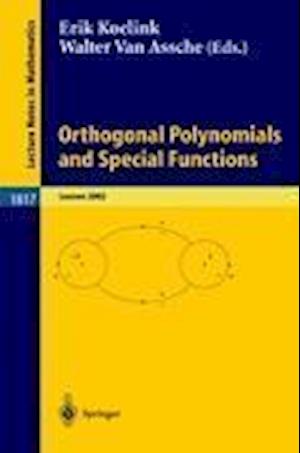 OrthogonalPolynomialsandSpecialFunctions(OPSF)is a veryoldbranchof mathematics having a very rich history. Many famous mathematicians have contributed to the subject: Euler's work on the gamma function, Gauss's and Riemann's work onthe hypergeometricfunctions andthe hypergeometric di?erentialequation,Abel's andJacobi'sworkonelliptic functions,andsoon. Usuallythespecialfunctionshavebeenintroducedto solveaspeci?cproblem, and many of them occurred in solving the di?erential equations describing a physical problem, e.g., the astronomerBessel introduced the functions named afterhiminhisworkonKepler'sproblemofthreebodiesmovingundermutual gravitation. So the subject OPSF is very classical and there have been very interesting developments through the centuries, and there have been numerous appli- tions to various branches of mathematics, e.g. combinatorics, representation theory,numbertheory,andapplicationstophysicsandastronomy,suchasthe afore-mentioned classical physical problems, but also integrable systems, - tics,quantumchemistry,etcetera.SoOPSFiswell-established,andverymuch driven by applications. The advent of the computer, ?rst thought to be fatal to the subject, turned out to be a stimulus, ?rst of all because it allowedmore detailed computations requiring special numerical algorithms, but mainly - cause it led to automatic summation routines, notably the WZ-method (see Koepf's contribution). So OPSF is a very lively branch of mathematics. Since more advanced courses on OPSF seldom appear in the curriculum, we felt the need for such courses for young researchers (graduate students and post-docs). A series of European summer schools was started with one in Laredo, Spain (2000) and one in Inzell, Germany (2001). This book contains the notes for the lectures of the summer school in Belgium in 2002, which took place from August 12-16, 2002, at the Katholieke Universiteit Leuven, Belgium.In2003asummerschoolinOPSFwillbeheldinCoimbra,Portugal.