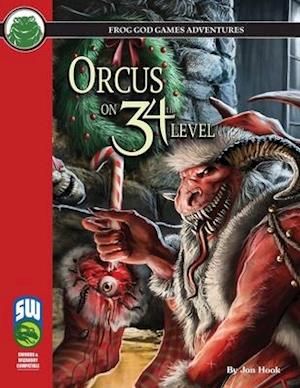 This high-level adventure plunges the players into the lowest depths of a mega-dungeon - the 34th level! This traditional dungeon crawl is anything but. Welcome to The Candy Crypt, where the foul demon Orcus's Claws manufactures bittersweet treats and poisoned dreams. As the title suggests, this adventure can be placed at the bottom of any mega-dungeon, or it can be an isolated crypt hidden within the peaks of any frozen mountain chain. Inventory your gear and pack well: you are going to need it.

The cold winds wash down from the north as the Northern Azure star shines over the village of Newville. The stars are right, as the constellation Gorgon Major rises in the east for the first time in a millennium. Sages scream in terror as they realize the time is nigh. Orcus' Claws won't be alone anymore; his beloved estranged wife, banished by the Forces of Law into a pocket dimension beyond the stars, is about to be released. It is the adventurers' duty to thwart the summoning ritual - Claws must be stopped at all cost - he cannot summon his wife, Nohell Claws!