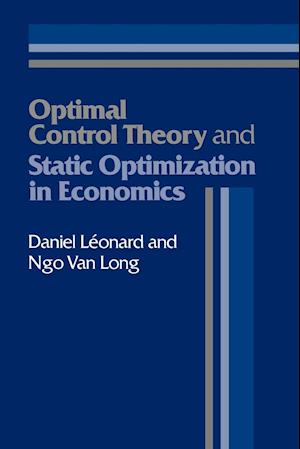 Optimal control theory is a technique being used increasingly by academic economists to study problems involving optimal decisions in a multi-period framework. This textbook is designed to make the difficult subject of optimal control theory easily accessible to economists while at the same time maintaining rigour. Economic intuitions are emphasized, and examples and problem sets covering a wide range of applications in economics are provided to assist in the learning process. Theorems are clearly stated and their proofs are carefully explained. The development of the text is gradual and fully integrated, beginning with simple formulations and progressing to advanced topics such as control parameters, jumps in state variables, and bounded state space. For greater economy and elegance, optimal control theory is introduced directly, without recourse to the calculus of variations. The connection with the latter and with dynamic programming is explained in a separate chapter. A second purpose of the book is to draw the parallel between optimal control theory and static optimization. Chapter 1 provides an extensive treatment of constrained and unconstrained maximization, with emphasis on economic insight and applications. Starting from basic concepts, it derives and explains important results, including the envelope theorem and the method of comparative statics. This chapter may be used for a course in static optimization. The book is largely self-contained. No previous knowledge of differential equations is required.

Forfattere
Bibliotekernes beskrivelse This textbook is designed to make the difficult subject of optimal control theory accessible to economists while maintaining rigour.