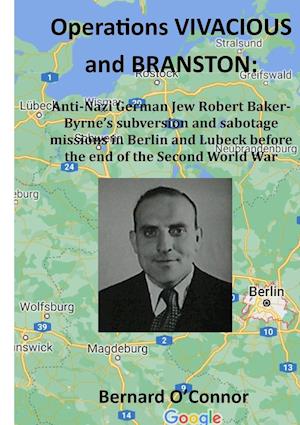 Following D-Day, the Allied invasion of France, plans were made to invade Germany. The British Special Operations Executive (SOE), set up by Winston Churchill in 1940 'to set Europe ablaze by sabotage', liaised with the American Office of Strategic Services (OSS) to recruit anti-Nazi Germans willing to be trained for subversion and sabotage missions in Germany. Rudolph Becker, a German Jew, had fled persecution in Germany and, after living in France and Mexico, settled in England. He married, joined the Pioneer Corps and changed his name to Robert Baker-Byrne. Recruited by SOE in 1943, he received paramilitary, parachute and clandestine warfare training and then briefed for a sabotage mission in Berlin. His mission was to destroy an engineering factory making parts for the V rockets. Dropped in Germany in November 1944, he attempted his mission and escaped through Switzerland. Brought back to England, he was debriefed and prepared for a sabotage and subversion mission in Lubeck. He was dropped in March 1945 and was eventually overrun by the Allies. . Using his personnel file and mission papers which were found in the National Archives in Kew, Bernard O'Connor, author of many books on the SOE, has researched Baker-Byrne's story and provides a detailed documentary history of his involvement in secret operations, Operations Vivacious and Branston also provides insight into the day-to-day workings of the British and American intelligence services and includes previously unpublished first-hand accounts of conditions in Germany between November 1944 and May 1945.