- Role and Relevance of Brand, Company and Other Names in Economic Contexts 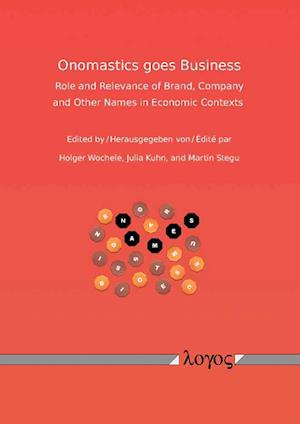 Over the last few decades, onomastics has widened its research focus from a largely theoretical and often historical approach to a more synchronic and applied' orientation. This re-orientation has also brought about a growing interest in name types, such as brand, product, and company names, which play an important role in business and the economy. Not only in the special sections on conferences of the International Council of Onomastic Sciences (ICOS), but also elsewhere a certain tradition has been established organising independent symposia devoted to names in business and the economy. In October 2005 the workshop "Wirtschaft, Kommunikation und Sprache" ("Economy, Communication, and Language") took place during the Austrian Linguistics Conference in Graz. The series of symposia "Names in the Economy" started officially in Antwerp in 2006. The second symposium was organised in Vienna in 2007, a third symposium was held in Amsterdam in June 2009 and a fourth in June 2012, in Turku/Finland.The present volume contains most of the papers given at the international symposium on Names in the Economy, held at the Wirtschaftsuniversitat Wien from 15 to 16 June 2007. Most of these correspond to presentations given there, but some develop ideas that emerged during discussions at the conference. It was the editors' conscious decision not to follow the general tendency to use English as the sole academic language but rather to publish in a variety of different languages. The contributors to this volume come from different academic and non-academic backgrounds and are at different stages of their careers.The book is divided into four sections: after various general studies (1) come contributions on the genesis and structure of brand names (2) and on diachronic aspects of brand names (3). The volume concludes with a number of case studies (4).