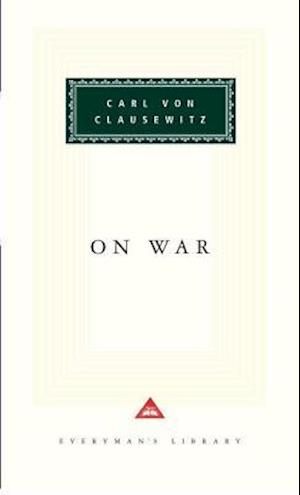 Carl von Clausewitz was not only an officer who served with great distinction during the Napoleonic campaigns but was also a military historian and intellectual of the highest order--at ease with both the strategic doctrines of his time and the larger movements of thought in the world around him. Out of these elements he distilled his classic discussion of the nature and meaning of one of humankind's central endeavors, war--which he famously declared to be "the continuation of politics by different means." Though unfinished at his death, On War contains all his important ideas about absolute versus limited war, the intrinsic violence of war, and its necessary subjugation to political ends. It would be impossible to overestimate the influence of this book on subsequent strategic thinking, on the political considerations that underlie such thinking, and on the general understanding of human conflict. (Book Jacket Status: Jacketed)

Forfattere
Bibliotekernes beskrivelse The growing interest in Clausewitz's theoretical, political and historical writings in recent years suggested that the time had come for an entirely new translation. We have based our work on the first edition of 1832, supplemented by the annotated German text published by Professor Werner Hahlweg in 1952, except where obscurities in the original edition-which Clausewitz himself never reviewed-made it seem advisable to accept later emendations.