On the Move to Meaningful Internet Systems 2005: CoopIS, DOA, and ODBASE 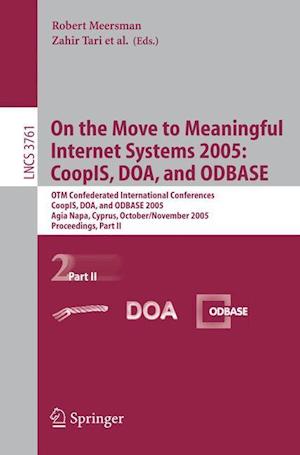 such as the modeling of (legal) regulatory systems and the ubiquitous nature of their usage. Weweregladto seethatin 2005undertheinspiredleadershipofDr. Pilar Herrero, several of earlier successful workshops re-emerged with a second or even third edition (notably WOSE, MIOS-INTEROP and GADA), and that 5 new workshops could be hosted and successfully organized by their respective proposers: AWeSOMe, SWWS, CAMS, ORM and SeBGIS. We know that as before, their audiences will mutually productively mingle with those of the main conferences, as is already visible from the overlap in authors! A special mention for 2005 is again due for the second and enlarged edition of the highly successful Doctoral Symposium Workshop. Its 2005 Chairs, Dr. AntoniaAlbani,Dr. PeterSpyns,andDr. JohannesMariaZaha,threeyoungand active post-doc researchers de?ned an original set-up and interactive formula to bring PhD students together: they call them to submit their research proposals for selection; the resulting submissions and their approaches are presented by the students in front of a wider audience at the conference, where they are then independently analyzed and discussed by a panel of senior professors (this year they were Domenico Beneventano, Jaime Delgado, Jan Dietz, and Werner Nutt).These successful students also get free access to "all" other parts of the OTM program, and only pay a minimal fee for the Doctoral Symposium itself (in fact their attendance is largely sponsored by the other participants!). The OTM organizers expect to further expand this model in future editions of the conferences and so draw an audience of young researchers into the OTM forum.