On Keats's Practice and Poetics of Responsibility

- Beauty and Truth in the Major Poems 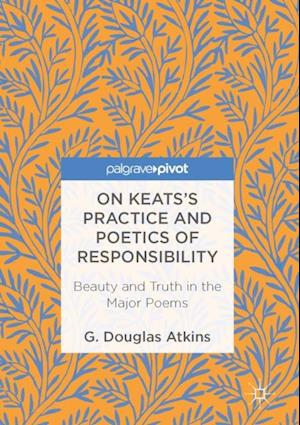 This accessible, informed, and engaging book offers fresh, new avenues into Keats's poems and letters, including a valuable introduction to 'the responsible poet.' Focusing on Keats's sense of responsibility to truth, poetry, and the reader, G. Douglas Atkins, a noted T.S. Eliot critic, writes as an ama-teur. He reads the letters as literary texts, essayistic and dramatic; the Odes in comparison with Eliot's treatment of similar subjects; 'The Eve of St. Agnes' by adding to his respected earlier article on the poem an addendum outlining a bold new reading; 'Lamia' by focusing on its complex and perplexing treatment of philosophy and imagination and revealing how Keats literally represents philosophy as functioning within poetry. Comparing Keats with Eliot, poet-philosopher, this book generates valuable insight into Keats's successful and often sophisticated poetic treatment of ideas, accentuating the image of him as 'the responsible poet.'