The Treasures of the Olympic Games 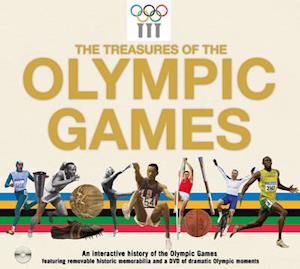 The quadrennial summer Olympic Games is the biggest festival of sport on the planet, creating instant heroes and gallant losers, to say nothing of iconic moments of triumph and glory. Published in association with the official Olympic Museum in Lausanne, a foundation of the International Olympic Committee, The Treasures of the Olympic Games brings to life, through more than 200 photographs and 20 removable artifacts, the glorious history of the summer Olympic Games illustrating the Olympic values that unite the world through sport every four years. Beginning in 776 BC in ancient Greece through to its revival in 1896 and the 24 subsequent modern games, this exceptional new title beautifully charts the event's absorbing and exemplary history and a wealth of world sporting achievement. A book of dreams, this is the first time that the Olympic Museum have co-operated in producing an interactive book containing facsimiles of rare historical documents from their exclusive archive, allowing readers to get closer to the world's greatest sporting spectacle than has ever been possible before.The Treasure of the Olympic Games' exclusive includes: minutes from the 1894 IOC meeting agreeing to re-establish the Olympic Games. It offers an original poster showing the events of Paris 1900 Games. It is an invitation to the Royal Box at the London 1908 Games. It is a model Olympic Village from the Los Angeles 1932 Games. It provides correspondence expressing concerns about the organization of the Berlin 1936 Olympic Games; a fold-out venue map to 1952 Helsinki Olympic Games. It features Tokyo 1964 Opening ceremony tickets and media passes. It provides a police report into the Munich 1972 hostage taking. It offers a recreation of a US 'Boycott the Games' car bumper sticker form the Moscow 1980 Games. It includes a Olympic Truce document from the Barcelona 1992 Games. It provides a London 2012 poster featuring the vibrant official emblem.