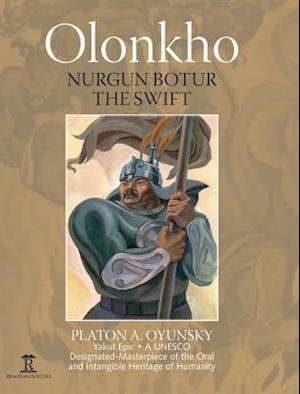 Written down for the first time in the indigenous Sakha language of Yakutia ( Sakha Republic, northeastern Siberia) in the early 1930s by the politician, poet and story-teller Platon A. Oyunsky (1893 - 1939), this first English translation was initiated by the Institute of Foreign Philology and Regional Studies of the North-Eastern Federal University, Yakutsk, in 2007, following the UNESCO proclamation in 2005 that the Olonkho was to be honoured as a Masterpiece of the Oral and Intangible Heritage of Humanity. Olonkho is the general name for the entire Yakut heroic epic that consists of many long legends - one of the longest being 'Nurgun Botur the Swift' consisting of some 36,000 lines of verse. Like Homer's Iliad and Odyssey, the Finnish Kalevala, the Buryat Geser, and the Kirghiz Manas, the Yakut Olonkho is an epic of a very ancient origin dating back to the period - possibly as early as the eighth or ninth centuries - when the ancestors of the present-day Yakut peoples lived on their former homeland and closely communicated with the Turkic and Mongolian peoples living in the Altay and Sayan regions.The Sakha language in which the Olonkho is written (over the previous centuries it was only ever spoken or sung) is one that is enriched by symbols and fantastic images, parallel and complex constructions, traditional poetical forms, figurative expressions and alliteration. As with all Olonkho stories the hero - in this story Nurgun Botur the Swift - and his tribe are heaven-born, hence his people are referred to as 'Aiyy kin' (the deity's relatives). Naturally, too, on account of his vital role (in saving his people from destruction and oblivion by evil, many-legged, fire-breathing, one-armed, one legged Cyclops-type monsters - the Devil's relatives representing all possible sins), he is depicted not only as strong, but also a handsome, remarkably athletic and incredibly brave and well-built man 'as swift as an arrow', but also with an uncontrollable temper when required.Despite the many and complex linguistic challenges facing the translation team, this rendering of the Olonkho in the English language will surely be welcomed by both Western scholarship and the English-speaking world in general, providing as it does a remarkable insight into both an ancient peoples and a little known culture boasting an evocative oral tradition of remarkable richness and colour that would otherwise have been lost to mankind. Readers will be interested to know that in addition to being an outstanding poet, Platon Alexeyevich Oyunsky (2013 marks the 120th anniversary of his birth) was both the founder of the Sakha literary form of the language and one of the founders of the Yakut Autonomous Republic.