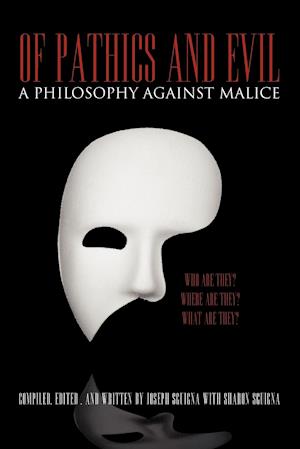 Joseph Sguigna researched the subject of evil in relation to psychopathy for sixteen years, and his book Of Pathics and Evil is the culmination of that research. Mr. Sguigna's insightful approach to the subject of psychopathy differs from all other books on the subject from four standpoints: (1) it is a compilation of personal accounts from psychopaths themselves and from the victims of their destructive behavior; (2) he has cleared up the frustrating problem of distinguishing the differences between the psychopath, the sociopath, the narcissist, and the psychotic, and (3) he has consolidated these four terms under the inclusive term,"pathics." - He gives his wife credit for this inclusive term; (4) he has brought to the foreground an awareness of pathic behavior in both women and children, which has been mostly in the background of (psycho)pathic studies; and (5) he explores the phenomenon of the pathic character in relation to human evil through an extensive compilation of quotations by eminent persons on the subject of evil as inherent to human nature. It is a fascinating, wrenching study of both evil and pathics as it weaves in and out of the variations of pathic behavior. He saves the reader from sinking into despair on reading these graphic accounts by offering his own wisdom-philosophy derived from personal experience, extensive study, and intuitive insight. As his friend said of the book, "You've put morality into it." Readers will emerge from this book the wiser for it, with a deep and incisive understanding of both evil and pathic behavior that will assist them in recognizing, and protecting themselves from, the predators that invade their lives. For truly has Of Pathics and Evil struck at the root of evil in line with Thoreau's statement, "For every thousand people hacking at the branches of evil, there is one person striking at its root."