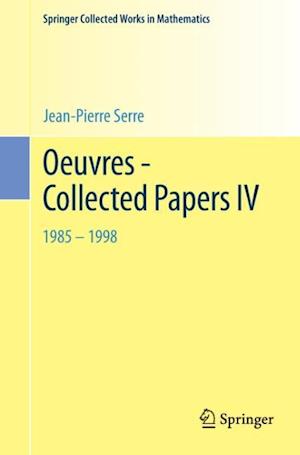 The impact and influence of J.-P. Serre's work have been notable ever since his doctoral thesis on homotopy groups. The abundance of findings and deep insights found in his research and survey papers ranging from topology, several complex variables, and algebraic geometry to number theory, group theory, commutative algebra and modular forms, continues to provide inspiring reading for mathematicians working in these areas, in their research and their teaching. Characteristic of Serre's publications are the many open questions he formulates pointing to further directions for research. In four volumes of Collected Papers he has provided comments on and corrections to most articles, and described the current status of the open questions with reference to later findings. In this softcover edition of volume IV, two recently published articles have been added, one on the life and works of Andre Weil, the other one on Finite Subgroups of Lie Groups. From the reviews: "This is the fourth volume of J-P. Serre's Collected Papers covering the period 1985-1998.Items, numbered 133-173, contain "the essence" of his work from that period and are devoted to number theory, algebraic geometry, and group theory. Half of them are articles and another half are summaries of his courses in those years and letters. Most courses have never been previously published, nor proofs of the announced results. The letters reproduced, however (in particular to K. Ribet and M.-F. Vigneras), provide indications of some of those proofs. Also included is an interview with J-P. Serre from 1986, revealing his views on mathematics (with the stress upon its integrity) and his own mathematical activity. The volume ends with Notes which complete the text by reporting recent progress and occasionally correct it. Zentralblatt MATH